Time is passing by faster than a blink of an eye, for me anyway. My brain is still trying to process that yesterday was Thanksgiving! I’ve been mentally writing blog posts since the last one. Unfortunately, it hasn’t made it to a digital version until now. 🙂

I traveled a little for a few jobs and not for jobs. Not very far in distance but it still seems a world away based on the environments I was in. I’ve experienced a few first these last few months as well. One is traveling up to the Pennsylvania Wilds. Living in PA as long as I have, I hadn’t traveled up this way. It’s located up in northern Pennsylvania, across many counties, and is a great place for outdoor enthusiasts to visit. The forests and other natural areas in this region are still untamed. I went to a small village where it is known for having the largest free-roaming herd of elk. There weren’t any elk to be seen at the visitor’s center when I was there but was directed to a place where there were some that came out of the woods for dinner. I joined others that where there to watch and take photos. I think I saw about three or four and by the time I left, there were probably around eight ignoring the crowd and concentrating on dinner. A few watchers noticed my 100mm macro lens and thought it must take great images of the elk. In reality, I really needed a longer lens. I did see someone have what looked like a 800mm lens. Here’s a cropped image of what I captured. Nothing great but nice to document the trip.

Another part of the Pennsylvania Wilds I visited was Pine Creek Gorge, otherwise known as the Pennsylvanian Grand Canyon. I was really hoping to see some river otters while I was there but that wasn’t to be. I didn’t even see the campground I stayed at in daylight until the morning I checked out! There are a few shots that, I think, came out amazing and will be on my website shortly. The last few months, I’ve been thinking about capturing needing to practice capturing images with fog. I unexpectedly got that opportunity while I was here at Pine Creek Gorge. The second morning, I went over to the west rim of the gorge, hoping to capture a different perspective. There was a huge wall of fog that I entered on the way there and still hadn’t lifted when I left. I didn’t get any gorge scenes but I did get some forest scenes which I was really happy with. Here’s an image from that trip. I was happy that the autumnal colors were bright and crisp this year, although, I’m not sure I was able to capture it in camera well. 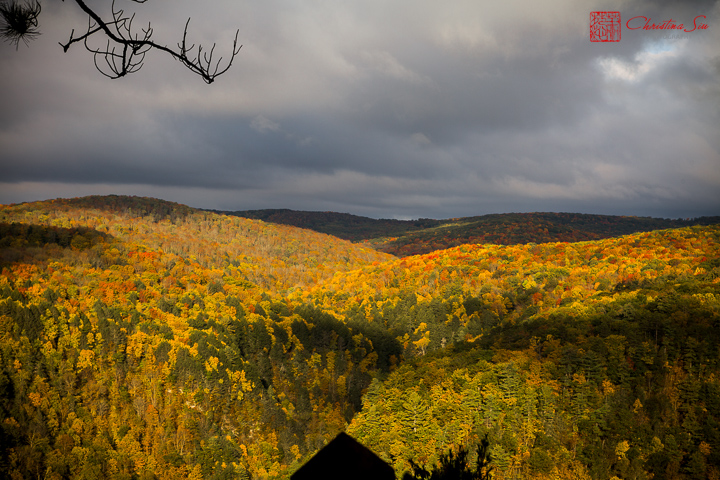 Another first for me was going to a sunflower farm. I was really excited for this trip thinking I get to cross something off my photo bucket list. I was thinking there’d be great blue skies and fields and fields of towering sunflowers. As I neared the farm, I drove into heavy, thick fog (again!) and very cloudy skies. The rolling hills of sunflowers weren’t that big (which I was warned about) and the sunflowers were maybe waist level. I had trouble finding scenes that beckoned to be photographed so I ended up concentrating more on some closeups and individuality, the ones that refuse to conform to the norm. Here is one I thought was pretty cool, all flowers facing the same way except for that One, the Rebel. Hmmm…I think that is what the title will be for the final image I pick. 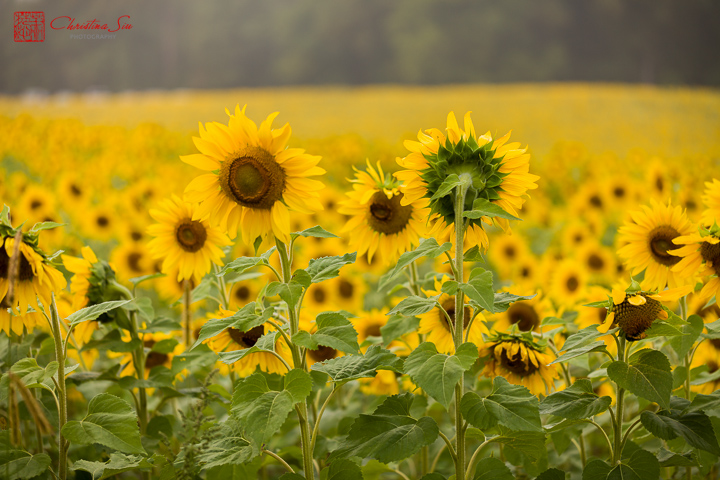 Well, as this seems to be my longest post yet, I’ll save the rest for the next post. Hope you enjoyed the update!